Showing posts with the label causes of epilepsy
Show all 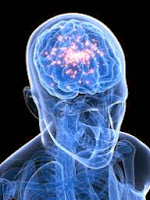 What is Epilepsy? Abnormal electrical activity in the brain can cause seizures. When a person has repeated seizures, this condition is called epilepsy. Seizures happen when the electrical system of the brain malfunctions. Instead of discharging electrical energy in a controlled manner, the brain cells keep firing. The result may be a surge of energy through the brain, causing unconsciousness and contractions of the muscles. If only part of the brain is affected, it may cloud awareness, block normal communication, and produce a variety of undirected, uncontrolled, unorganized movements. Most seizures last only a minute or two, although confusion afterwards may last longer. An epilepsy syndrome is defined by a collection of similar factors, such as type of seizure, when they developed in life, and response to treatment. What Causes Seizures? There are many different causes of seizures. According to some studies, between 7% and 10% of people will suffer a single isolated sei
Post a Comment
Read more
More posts