Showing posts with the label faith
Show all

Spat On the Face

- August 27, 2014
There are some things or instances at some part of our lives which really becomes a turning point to our very existence. Sometimes, it might be a big issue or just a trivial matter. For me, I have had hordes of experience on my very person which has been intrinsically interwoven into my life and its very beautiful too to look at when I sit and evaluate. It really helped me be a better person. But one instance really did hurt me. It didn't happen to me, but an incident triggered my memory of the previous incident. Long time back, may be five years back, it happened in a remote village in Andhra Pradesh. My family and myself decided to buy a plot of land. So, every evening we went around looking at good properties. So once our auto driver came to pick us up for our next destination,he and myself were waiting for others to join. As all were ready and when we started the auto, a widow passed us. Immediately, the auto driver spat and got off the auto. We were surprised by his acti
Post a Comment
Read more

- December 30, 2013
As the eyes of 2013 are drooping for a long sleep, the atmosphere here is that of expectation. You know, after the sleep you would be having a brand new day, new year and new hopes. But there is one funny part, how do we know the difference from the old year and the new year, in fact, what about months. Do you know the difference? I really do not know. So for me, I would say, there doesn't make any sense in putting expectation or planning a new beginning for a specific date or a day because all days have a morning, afternoon, evening and night. The attitude we have is what makes the difference. So what do you think? Are you planning to make a resolution for new year or for now? Think about it. I will think about it for sure. See you tomorrow. Until then, take care. Bye. Meena
Post a Comment
Read more

The Law of Prosperity 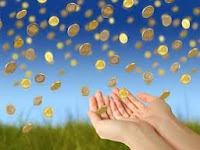 Prosperity is the result of putting the law of seed time and harvest to work for you. Gal 6:7,9 1) What do you really want? Be specific in your petitions to the universe. Don’t keep affirming that you want a generous income and fulfilling work, without clarifying exactly how much you wanted to earn, and in what form you wanted the work to arrive. That’s like walking into a restaurant and telling the waitress, “you want food.” What kind of food? How much food? Hot or cold? Would you like a beverage also? What condiments would you prefer with your meal? Many of us are vague in our desires. We know the general result we’d like (an end to financial difficulties, a better job, etc.) but there are many more facets to consider. First things first – we need to have a pathway for the prosperity to enter our lives, it might be business management, or hair styling, or baking or writing. It is possible to earn great money doing something other than what you truly love, but too many of us make
Post a Comment
Read more

Climate change is caused by an increase in the earth’s temperature. Natural causes can include volcanic activity, a change in the energy from the sun and variations in the earth’s orbit around the sun. NATURAL CAUSES There is little evidence of dramatic changes in any of these factors sufficient to account for the dramatic temperature increases of the past few decades, and scientists have concluded that the main cause is the increase of the gases water vapour, carbon dioxide, methane, nitrous oxide and chlorofluorocarbons in the atmosphere. These gases trap the sun’s energy which reaches the earth’s surface, and reduce the amount reflecting back into space, thus warming the earth’s surface. HUMAN CAUSES The major source of the increased gases is human activity, which has significantly increased these gases since the industrial revolution. The major causes are the burning of fossil fuels for energy generation and transport, and agricultural activities (land clearing, fertiliser u
Post a Comment
Read more

Today I stood in the judgement podium, just like Jesus stood in front of Pontius Pilate. It was not a very happy moment. But one day, we all will stand in this place for sure, for our past mistakes. The funny part is, just like Jesus was condemned for several reasons, which was fabricated, we too would be condemned for no reason of ours. But don't get saddened, that is how, we get to clear our past mistakes. If we run away and chicken out from this situation by blaming others or giving reasons, then we will have to stand in the same podium again, with another bigger issue and of much higher grade. You have a choice, whether clear off this issue by facing it and finishing it in one go and make it your last judgement or have a repeat of all these things again and again. It was weird when I used to read the Bible, why didn't Jesus, the son of God did not respond, when he was being judged or lashed or crucified. Now I understand, why. Believe me, this Bible is not just another ho
Post a Comment
Read more

Mark your presence in History.

- November 13, 2013
The place where I stay is very photogenic area. Its because it has a lot of history. Now in order to have history, it need to be there from time immemorial. So I would like to weave a story of time. There was once a lame boy named Ralph, who wanted to be famous. So he went to his father and asked, "Father, what should I do to become famous?" The father replied, "Do something good." So he decided to do something good. But his way of walking made everyone laugh. He was always the butt of joke for everybody. Even then, he tried to do good. But he was more a laughing stock than a social worker. Seeing the humiliation Ralph was facing, his mother said, "Son, why are you making everyone laugh at you?" "Mother, I am glad, that I can bring a smile to others face. I know, they are laughing at me. But I take it as a gift. God has given me, my lameness and I would cherish it and do whatever good I can do. Mother, don't be sad for me because I am not.
Post a Comment
Read more

- August 06, 2013
I have always believed that what we believe is what we get and that too exactly the same no less or no more. I work in a place, where nature is given more prominence, cats eat rats or snake eats rats, or crows scavenge or whatever. All animals are there, roaming about freely. So yesterday, a wrestling competition was taking place from the ceiling of my office. I thought it might be the rat and the snake. But I was not very sure. Anyway I didn't feel scared, though it was happening exactly overhead and the ceiling was made of bamboo mat. But my colleague was scared to death, she was saying, Meena, just move off from there or else, the rat or the snake might fall on you. Anyway I didn't budge, but my friend moved away and exactly at that moment, the rat fell down exactly where she had sat. At that moment, I knew, why the rat fell, because, my friend believed that it will fall on her. So now you understood, why I am saying this. I would like to suggest, if you want something to
Post a Comment
Read more
More posts