I from very young age, have used the sign of the cross and still using. I was thinking it was only for christians. But it was quite by accident, I came to know, another big truth underlying the sign of the cross before a prayer. (Don't ask me, what's the first truth. I don't know). I don't know any history or heritage of it. But I know one thing which gives credence to its significance, which we should respectfully use it by every human being in this Universe before they pray. Surprised!!! Don't be.

So, let's check, with an example.  I will take my prayer. I make the sign of the cross and I start to pray, "God give me an Idea for my blog." If I believe in God, then I would not worry about it or doubt Him because I really know, that He will give me and I say, "Thank you , Bye." and make the sign of the cross and return. Here, the prayer will be answered immediately.

But if I believe God is up in heaven and I have lots of unanswered prayers in my life, I will think, "Well, there are so many people who need far more very necessary things than this unworthy and inconsequential need as an idea for a blog. I don't think, God will hear my prayer. So I say to myself, "Forget it, okay. bye." Makes the sign of the cross and come out of the prayer.  Here, as predicted, the prayer will never be answered.

Now, Let's go a bit more deeper. In this prayer we have 3 important ingredients - Thought or the prayer, feeling of worthiness or unworthiness and emotion of happiness and indifference. 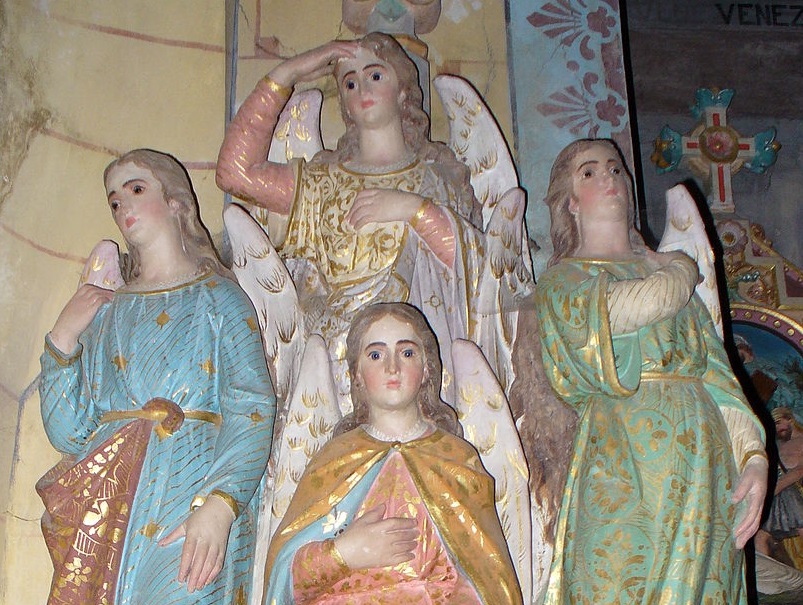 The thought - Which comes from the head is named as "Father". Now, let's check my  thought here - An idea for the blog." It doesn't matter, whether it's important or unimportant. Just remember, it's "My Thought" or My Need.

The feeling - Which comes from the heart is named as "Son" and the feeling here is "Strong Faith". In the first instance and "Doubt" in the second instance. That's your choice, what you should feel when you pray.

The emotion - Which the body generates as part of the feeling created by the heart is named as "Holy Spirit". In the first instance, the emotion is that of "happiness that the prayer is already granted" and of "gratitude" for hearing the prayer. In the second instance, it's that of "Indifference" of "I am unimportant person feeling". We cannot blame your body for generating the emotion according to the feeling you have. So that too is your choice.

Now let's check what the teaching is,

Father, Son And The Holy Spirit together is God. God can create anything.

So, if the trinity is the source of creation, then it's a reminder, to everyone who makes the sign of the cross, that you have the Trinity in you-  Your Thought, Your Feeling and Your Emotion. No one can take that away from you.

"Guys, you can think or pray whatever you want, have faith without a single doubt that your prayers is granted immediately and let the joyous emotion, the emotion of gratitude be there always around you, until your thought become a reality." Don't you think, everyone should know it and follow it? Well, you decide.

In the end, it's your choice. So don't blame God that He didn't hear your prayer because He gave the power to you to create whatever you want. Use it wisely.

Popular posts from this blog

- June 30, 2011
1.     Old age homes are meant for senior citizens who are unable to stay with their families or are destitute. These old age homes have special medical facilities for senior citizens such as mobile health care systems, ambulances, nurses and provision of well-balanced meals. So they can live a healthy life. 2.     Good services and good behaviour of the staff, food being   palatable and wholesome are the main advantage of old age homes. 3.     Apart from food, shelter and medical amenities, old age homes also provide yoga classes to senior citizens. Old age homes also provide access to telephones and other forms of communication so that residents may keep in touch with their loved ones. 4.     The entertainment and library facilities are also available for the sole purpose of the senior citizens. 5.     For older people who have nowhere to go and no one to support them, old age homes provide a safe haven. These homes also create a family like atmosphere among the residents. Senior ci
Read more

- June 27, 2011
Advantages and Disadvantages of Deforestation Deforestation is the process of converting forested lands into non-forest sites that are ideal for crop raising, urbanization and industrialization. Advantages: 1.        Deforestation provides the materials for various industries, such as logs for the logging industry and trees for the paper industry. The forest products industry is a large part of the economy in both developed and developing countries. 2.        It opens more job opportunities for people   in the lumbar industry besides Wood cutters , there are those who work in processing plants to make glue from wood sap, process pulp into paper, and others.   3.        Cutting down trees provides charcoal, a source of energy. 4.        For every patch of forest cut down, arable land becomes available for farmers. 5.        The land can be used as an area to place urban living sites like apartments, houses, and buildings. 6.          The number of people employed by such a construct
Read more

A Vote of Thanks during Christmas Celebration

Hark how the bells Sweet silver bells All seem to say Throw cares away That’s what Christmas is all about. Honorable Chief Guest, Respected Reverend Manager, Loving Principal, Reverend Fathers, Loving Parents, teachers  and my dear friends. As the curtain falls on a very special celebration, I am bestowed with the  privilege of thanking you all for your esteemed presence. Celebration without people is like a night sky without stars. I on behalf of ________School would like to thank our chief guest ____________ for having graced this occasion to celebrate with the tiny tots of _____School, the very first Kindergarten Christmas. Thank you Sir/Fr. Our manager has always extended his incessant support in all our activities and it is always a pleasure to have your presence Fr. So it is with a privileged heart, I thank you for your presence and your unfailing support, Thank you Fr. If it weren’t for our loving principal we wouldn’t have had our own Little Christmas, g
Read more